Click below to listen to my 2 min. Garden Bite radio show:  A soggy Spring and so-so seedlings

The Spring Equinox is scheduled for Wednesday.  I sure hope it makes it! So far it’s been one weird Winter, so let’s see what Spring brings!

Likely soggy soil if it’s not flooded. Dealing with flood issues is a real problem in my area.

As I’ve said many times before, don’t work a wet soil. Don’t even step on it if you don’t have to. As I write this, which will be a week ago from you hearing it, we have about 3 feet of snow in the yard (5 days later, it’s about a foot) and the storm drain is about a third open as the snow is melting with 40 degree temps. It had also rained!

But, Spring is coming this week. Whether Mother Nature is ready for it or not. I’m looking forward to snowdrops and daffodils and siberian squill and anything that isn’t white, brown or a pothole!

But Spring is coming, that’s what the calendar says! Sooooo, we’re going to plan for it…. I will say the seeds I planted and am rearing in my upstairs bathroom, actually sprouted.

I tried the newspaper method with the little wooden gadget. I’m not sold on that. The seeds in the little plastic trays sprouted faster and are growing more quickly. The paper containers dry out much quicker and they’ve been slow to sprout and grow.  There has been some discussion amongt master gardeners that the Burpee Organic Seed Starting Mix I used was not going well.  Here’s what I received from a friend:  This mix that didn’t thrive or germinate, then flopped over and died. Many MGs from around the state chimed in to say they had the same problem.

Mine started slow but I thought it had more to do with the location (it’s also not super warm there).  However, you can see they’ve sprouted (better in the black plastic) That may be due to being warmer there?  They are doing okay now but I don’t really have a good test site.

I also have a couple of more plants to start your 2019 Season… a dazzling new begonia called ‘Canary Wings Red’ (this is actually 2018) and a salvia that the hummingbirds adore called ‘Rockin’ Deep Purple’. 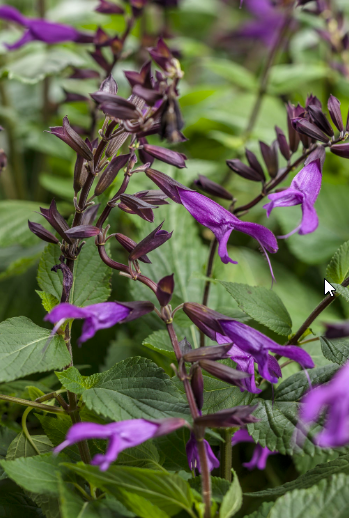 And there’s ‘Rockin fuschia’ too!