Click below to listen to my 2 min. Garden Bite radio show: Buckthorn, bunnies and blue pee?

From 2004 to 2009, I lived on 5 acres in Lakeville, MN.  While wandering through our woods, I discovered smurf blue stains in the snow!

Since the property had been deigned a “farm dump”, we lovingly cleaned it up.

But after spotting that blue stain, we thought “oh no, there’s a bubblin’ crude but it ain’t oil!  What the heck is it?”. It’s not like we went out there to spit out our mouthwash, or poured, what I called “Blue Juice” back in my traffic reporting days, out in the woods.  What on earth could have done that? 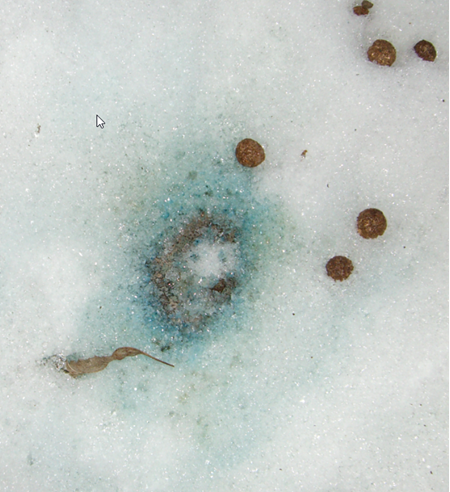 After much searching, and finding some very, shall we say vivid imaginations of others, the answer lay within the woods… Bunnies and Buckthorn!

While the process of us trying to eliminate the buckthorn from our woods, had started in 2005, as most know by now, that takes a LONG time, so the bunnies still had plenty to yet nibble on.

So what happens? When the rabbits eat the bark and twigs of the buckthorn, (not the berry as you would think) it passes through them and, a phytochemical in the buckthorn plant, turns their pee smurf blue when sunlight hits it!

Now, buckthorn, being an invasive alien plant, is not a favorite of our native rabbit population.  They have to be driven to eat it. That means this phenomenon doesn’t happen very often. In fact, I’ve seen it only once since then.  The odds of finding this is rare too as the actual urine has to be exposed to sunlight to create the smurf blue color.

You can see the rabbit pellets in the area along with the blue stains.  And there you have the mystery of the blue stains in the snow! It was NOT Bigfoot, a rabid coyote or a random blue juice tosser, but just a little rabbit that was pretty dang hungry.