Click below to listen to my 2 min. Garden Bite radio show: Corn smut and roasting tomatoes

Fresh tomatoes, green beans, beets, cucumbers and corn oh my! I just roasted some co-op bought plum tomatoes with  jalapenos, garlic, coarse salt, some with my oregano and some with my basil. A friend has been supplying me with fresh corn from her farm. It’s THE sweetest EVER! (Thanks, Mary!)

I grew corn twice but had so much corn smut that I gave up.  I’m not talking about some creepy thing you might see on the internet but a fungus that infects corn.

Some love it. In fact in Mexico it’s a delicacy called Huitlacoche sometimes referred to as Mexican truffle.  It’s not for me! But I dislike any fungus! One of my favorite restaurants where I live, Kahlo’s, has it on their menu. I just can’t make myself try it but you might like to…    Huitlachoche Recipes [University of Illinois]

Anyhoo, I roasted a small batch of tomatoes.  Slipped them in at 450 for about 30 minutes. My intern, Gracie, and I created a video last week before she starts 12th grade! I intend on having this video up soon.

The tomatoes will last for 5 days in the fridge but you can freeze them which is what I’ve done in the past. They’ll keep for up to 6 months, if they’re around that long.  I use them in stews and soups as well as pasta. 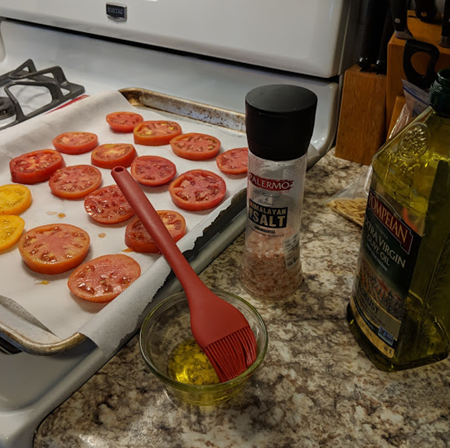 I highly suggest using plum, paste or roma style tomatoes. I didn’t on this first batch so they were juicy and messy. Tasty too. But the meatier the tomato, the better for freezing and refrigerating! The batch in the video are plum tomatoes!

I also dehydrate tomatoes – any heating intensifies the tomato flavor and this method works really well. I then put them in baggies, using them for salads in particular. But also freeze them and use them in recipes!