Click below to listen to my 2 min. Garden Bite radio show: Cucumelons and Fish peppers!

I’m pretty fortunate. I have listeners who will often share their bounty with me! So far this year I have had the sweetest corn on the cob ever, delicious Yukon gold potatoes and fresh edamame!

And then came the cucumelons and fish peppers. First the darling little cucumelons. Turns out Etsy sells a ton of these by various sellers. Click to find some! 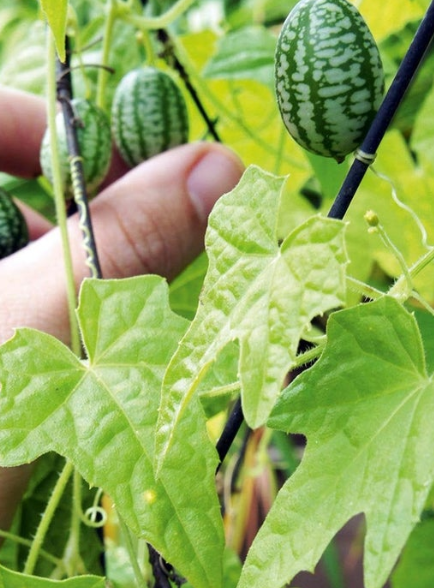 Bridgette dropped those off for me saying our local nursery down the block gives her something odd to try every year in her garden.

Cucumelons, also called Mouse Melons, are about the perfect size for mice… or for slicing into your salad. They taste like a cucumber squirted with citrus!

A cucamelon is the fruit of the Melothria scabra vine and is about the size of a grape. They’re not actually a hybrid of watermelons and cucumbers although they look like it. They’re also considered a tiny superfood, full of vitamins and minerals, antioxidants and fiber, and are also low in calories. PS, that link has some recipes too!

I can’t wait to try them next year on a trellis!

Now on to the fish peppers, something else I hadn’t heard of before. Believed to have arrived in North America by way of the Caribbean, fish peppers were immensely popular among the African-American community in Philadelphia, Baltimore, and the Chesapeake Bay region, where they were used in cooking the bounty of fish, crab and oysters. History of fish peppers from SmithsonianGardens 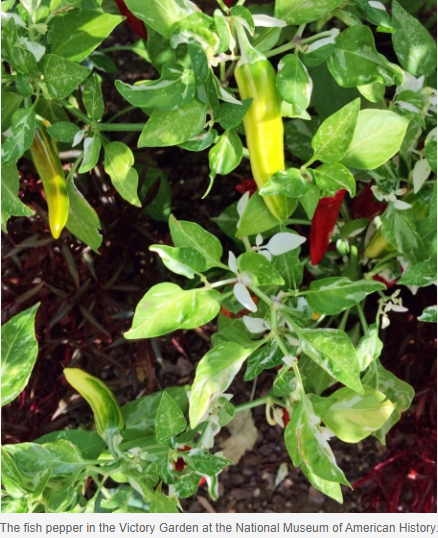 Fish pepper plants have striated and speckled white and green leaves, growing to a compact 2 feet tall. The peppers themselves are gorgeous, tarting as a solid creamy white, they develop into a light green with dark green striations, turning orange with dark brown striations until they finally mature into solid red peppers of flavorful culinary fire. And they are too hot for MY palette! Reportedly 12 times hotter than a jalapeno is too hot for me but what a beautiful container plant and you can pawn those hot peppers to friends!