Click below to listen to my 2 min. Garden Bite radio show: EAB treatment and tree replacements

The Emerald Ash Borer has slowly but surely made it’s way into many of our towns, if it’s not there already, it will be. 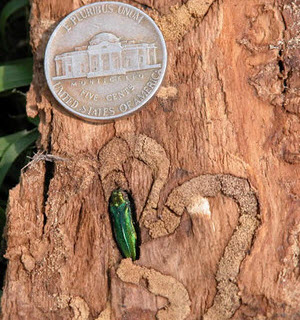 Cities that planted all Ash trees because of Dutch Elm disease are now faced with Ash tree removal. The city I live in hired an Arborist to check over the trees and we have plenty that are on the chopping block, a few that will be treated.

My friend and Arborist, Faith Appelquist just recently told me that the treatment is working. Here is more information from the University of Wisconsin Horticulture Extension on the treatment of Ash trees.  And a downloadable PDF… Is_My_Ash_Tree_Worth_Treating_for_Emerald_Ash_Borer 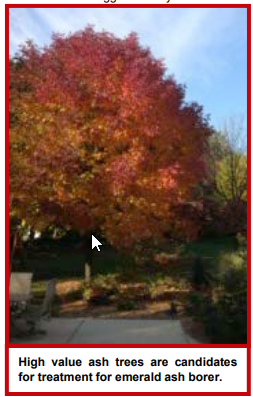 And yet more information: Multistate_EAB_Insecticide_Fact_Sheet

EAB is not going away but scientists have released a weapon, a wasp. Actually a few types have been released and are seeing some results.

Of course diversity in plantings is a great way to reduce the damaging effects, and consequent nakedness, of using ONE type of tree. We really didn’t learn much from Dutch Elm disease… but we are now.  AND there are some Elm trees that are now resistant of THAT problem! Check out this article on the beautiful American Elm tree.

Dutch elm resistant, ‘Princeton’ and ‘Valley Forge’ come recommended by the U of MN and hybrids named ‘Accolade’ and ‘Triumph’. 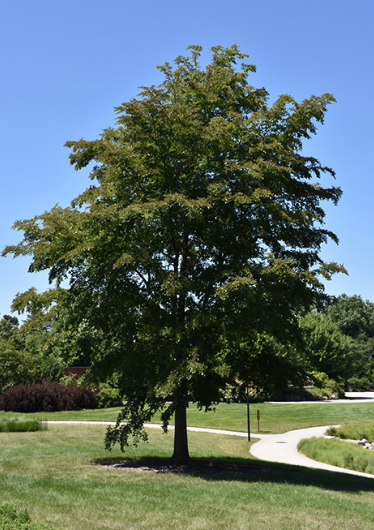 Other options for Ash tree replacements:

Honeylocust, although considered messy, is one of my favorites with it’s chartreuse spring color changing to dark green over the summer.

Maples are lovely. The Freeman maple is a cross between red and silver maple. ‘Autumn Blaze’ is a freeman maple and a lovely choice.

Silver maples have shallow roots so can be advantageous to plant around sidewalks and driveways.

The Gingko is a good choice but only if you buy the male tree.  The female trees fruit is very messy and smells like used baby diapers. YUK. However the male Gingko is a pretty cool tree and one I would recommend.

The Kentucky Coffee tree has become pretty popular.  It’s a broad spreading tree which will give you plenty  of shade, again, get the male variety if you don’t want the mess.

If you’re looking for a tough but slightly smaller tree, the European black alder might be a choice. This low-growing tree has round leaves that grow in clusters. It produces small cones, but they don’t fall from the tree. It handles poor soils extremely well, but it can invade natural areas, crowding out our natives.  In fact, the Morton Arboretum in Chicago doesn’t recommend it.

Other options include Lindens aka American Basswood.