It ain’t easy stopping invasive plants and pests from coming into our country.  The Upper Midwest just got a new warnings last week.

The Minnesota and Wisconsin departments of Agriculture issued alerts on EHS, Elongate Hemlock Scale.  And so did South Dakota…

This guy is from Asia and feeds on the underside of conifer needles. It was discovered on wreaths, swags and other evergreen decorations sold at big box stores. The Wisconsin Department of Agriculture, Trade, and Consumer Protection issued the warning after finding EHS in greenery at several retail chains.  Pest alert from the USDA on EHS 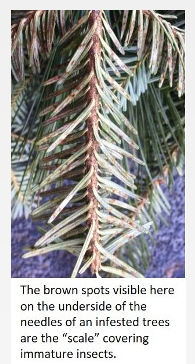 That’s when the MDA began inspecting similar retailers for the insect in any leftover greenery.  EHS was discovered at Home Depot and Menards locations. The companies pulled any remaining product off their shelves but the real warning came to consumers to burn or bag and throw away any items they bought. 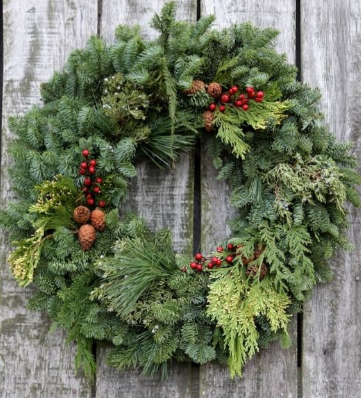 These evergreens should not be composted.  Elongate hemlock scale has been found in the eastern U.S but this is the first time in Minnesota and Wisconsin. It’s main diet has been Eastern Hemlock but, according to the Penn State Entomology Dept., it also feeds on cedar, Douglas-fir, pine, and yew.

It is believed that this armored scale insect was unintentionally introduced into the United States from Japan. It was first observed in Queens, New York in 1908.  While it took EHS about a hundred years to get here, there’s not much to do now except to try to contain it as much as possible.

This species overwinters as fertilized females or eggs. In early spring the females deposit eggs beneath their waxy covers and may continue to lay eggs through early summer. One female may produce a total of 20 eggs in a lifetime. Scales injure host plants by inserting their threadlike, piercing-sucking mouthparts into needles and, basically, sucking the life out of them.

Click on this link for a look at the life cycle of the Elongate Hemlock Scale from Penn State University.