Click below to listen to my 2 min. Garden Bite radio show: Fall allergies and monarchs 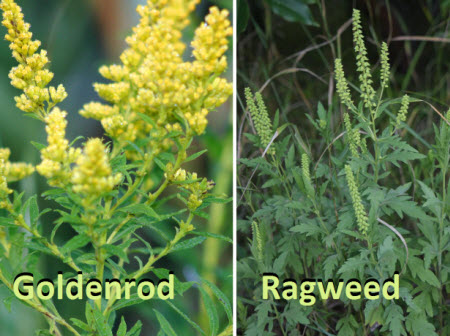 I looked up a chenopod and, the clearest explanation would be that it’s a type of weed like amaranth, lambs quarters and pigweed. Pollen counts are a bit higher in Minnesota and Wisconsin right now.

We’ve got some late blooming perennials peaking right now and the bees and butterflies are ALL over them. I’ll take the sniffles if I can have some Painted Lady butterflies!

A couple of years ago, I mistook the painted ladies for Monarch butterflies which are now on their way to Mexico where they’ll spend the winter.  That sounds quite lovely right now! Although I’m pretty sure the monarch aren’t thinking about sinking their toes in a nice sandy beach and sipping a margarita!

Monarchs migrate from Mexico to Canada in Spring and then head south in the Fall.  Just five years ago I was lamenting the demise of the Monarch as their habitat dwindles and possible problems with GMO’s having nearly eradicated milkweed, in farms and ditches.  However, Monarch Watch is posting more and more sightings every year.  Monarchs migrate alone but they roost together at night.  Depending on when they’re born, monarchs longevity varies.  They live just 2 to 6 weeks during the summer months but during migration they can live from August to April, unless something untoward happens as they travass the countries!   Monarchs go through 4 or 5 generations each year, and only one of these migrates. The migratory generation is the last one of a year, so it is probably the largest generation. This is a video I did with my neighbor who raises and releases monarchs!

I lived in Lakeville, MN for a time several years ago and these monarchs flew into the trees on my land.  It was an amazing site!