Click below to listen to my 2 min. Garden Bite radio show:  Fruiting fungi

As folks are out playing lawn darts they may be aiming at those lawn mushrooms that have popped up!  I’ve had questions concerning these fruiting fungi such as, will they harm my lawn, what’s wrong with my turf that it produces those ‘shrooms or one of my favorite is “why is that ugly thing growing in my lawn?”.

In areas where there’s been plenty of rainfall or excessive irrigation, you’ll find mushrooms growing.  They’re living on decaying organic matter in your soil.  When your soil is moist, the decaying matter breaks down and releases it’s nutrients into the soil where the fungi are allowed to take it up and produce fruiting bodies also known as mushrooms.  In most cases there’s nothing wrong with your lawn, in fact, it’s good that you have decaying organic matter that does release nutrients back into your soil.  But lots of folks don’t like seeing them, so for you, I would say just take a rake after them and remove the offending fungi.

The Fairy parasol were growing in a decaying tree.

Fairy Rings and they’re hard to get rid of.  They look like dark green circles with the inner circle brown.  The best way to tackle them is to mask the problem by using fertilizer.

The monster shroom found in the Big Woods, Nerstrand, MN 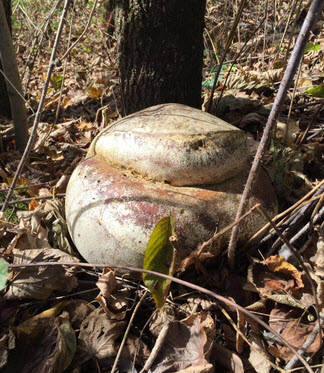 And now for some edible fungi that are really quite beautiful!  Pictures by Mike Callery….

And the famous Morel…

Link to interview with Mike Callery on mushroom hunting on “Northfield Outdoors”.  What to look for and what to avoid!