Click below to listen to my Garden Bite radio show:  Goats for grazing

Buckthorn and white sweet clover are two invasives no one with any acreage wants. Goats have been used on the west coast for some time but are now becoming a means of control in the midwest.  Cities are finding out that it works AND is cost effective.  The City of Northfield reports that an acre of land that is treated with a herbicide can cost upwards of $2,800.  Removing buckthorn by utilizing goats is usually around $300 to $700 per acre, and does not use any chemicals. 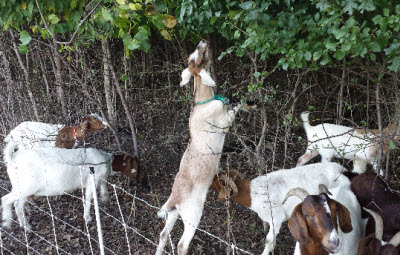 Kidding aside, ha!, goats have been hired out to eat their way through buckthorn, garlic mustard, wild parsley and Queen Anne’s Lace, among just about anything else. Goats prefer broad leafed plants so they eat those before they take out any grasses.  They also like to chew on branches which takes out the bark which then kills the plant .  Due to goats multi-chambered stomachs, any seeds are sterilized when they come back out as fertilizer!  So no new invasive species are planted.  Their stomachs also tolerate plants that are poisonous to most other animals.

An entrepreneurial couple started Goat Dispatch and call themselves a landscape cleaning service.  They even have their own Facebook page!  Goat Dispatch placed 10 goats in a fenced area at the River Bend Nature Center in Faribault for controlled grazing.  Talk about eco-friendly and on many levels.  No chemicals but plenty of fertilizer.  Goats prefer broad leafed plants so they eat those before they take out any grasses.  They also like to chew on branches, that means they take out the bark which then kills the plant .  Through their grazing habits, goats reduce the production of seeds by consuming seeding stems. Therefore invasive plant species such as Buckthorn can’t sprout as the immature seeds consumed don’t survive passage through the digestive tract.

Now, is this practical for your front yard, well, not likely unless you don’t live in town.  However, it’s great to know that there are other methods, more natural methods that are being used.