Click below to listen to my 2 min. Garden Bite radio show:  Good bugs, bad A!! bugs

When you hear crickets, what’s your first thought?  The joke bombed, yes, but after that? Loud and fairly ugly bugs?

Think again. Think nutrient cycling. They eat detritus, the plant parts that have died and fallen off the plant.  They then rid themselves of the plant in their waste which then goes into the soil, enriching it for the other plants.  We can attract them by leaving a layer of leaf litter as mulch.

From the moment the Assassin bug hatches, it’s a killing machine.  They eat insects including the dastardly Japanese beetles and stinkbugs by using their mouthparts to pierce the soft areas between the exoskeleton and sucking out their innards! There are 160 species of assassin bugs, that includes the “kissing bug”. We don’t have this relative here in the upper midwest – it’s too cold!

The little hover fly seems like it would be useless but au contraire! the larvae eat aphids.

Tachinid flies look like bristly houseflies and all of them are parasitoids, they kill their hosts!  They help keep garden pest populations down!

Parasitic wasps are not choosy, they attack and eat all insects but their favorites include aphids, mealybugs and caterpillars.

And then there’s the robber fly.  There are about 850 species! It’s known as the shark of the insect world.  A powerful predator, they dart from perches and catch grasshoppers, dragonflies, wasps and even japanese beetles.  They paralyze their victims with venom. 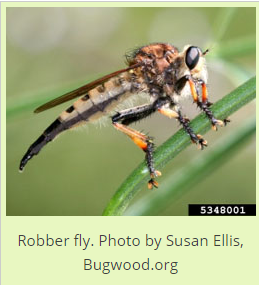 PS, you might find anthracnose in your garden due to the wet weather.  That’s a fungal disease. It’s not really something to be too concerned with but identification is always a good thing.