Click below to listen to my 2 min. Garden Bite radio show:  Gypsy Moths

The Gypsy moth is an invasive, leaf-eating insect that feeds on about 300 types of trees and shrubs in North America.

When their populations are high, gypsy moth caterpillars can strip an entire neighborhood or forest of leaves in May and June.

Repeated defoliations may weaken trees and leave them susceptible to other insects and diseases. Adult gypsy moths do not feed, but the adult females lay thousands of eggs which are easily transported to new areas by humans on firewood, outdoor furniture, camping equipment and vehicles.

The Minnesota Department of Agriculture (MDA) is setting over 20,000 traps this year looking for gypsy moth. The traps will be set throughout the eastern half of the state as well as spots in south central and southwestern Minnesota.

In Wisconsin, they have an aerial insecticide treatment, mainly on the eastern side, in the western part of Wisconsin where small, isolated populations of this pest are just starting to show up there’s another program called Slow The Spread (STS)

Fifty of Wisconsin’s 72 counties are under quarantine for gypsy moth. The most common treatment against gypsy moth, used in the home landscape, is a spray of Bacillus thuringiensis, commonly called Bt. This biological pesticide is highly specific, meaning different varieties of Bt affect only very specific species.  Bacillus thuringiensis kurstaki (Btk) is the certain strain that must be used to control gypsy moth. The caveat to Btk is that it CAN kill the Karner Blue Butterfly but does NOT bother bees. 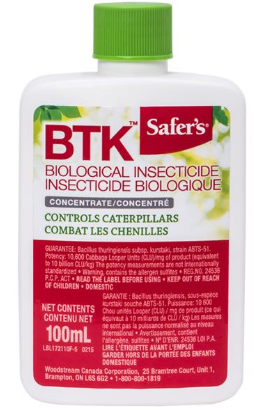