Click below to listen to my 2 min. Garden Bite radio show:  Japanese Beetles and the lost vine

I’ve shared on my Garden Bite facebook page about how the Japanese beetles have invaded my garden.  Last week I had to rip out my beautiful Virginia Creeper ‘Red Wall’. A hardy, healthy hybrid meant to be a lovely living fence.

Up until JB struck, it’s 2nd year was on record to be stunning. Unfortunately that nasty bug absolutely LOVES ‘Red Wall’. And it annihilated the foliage. 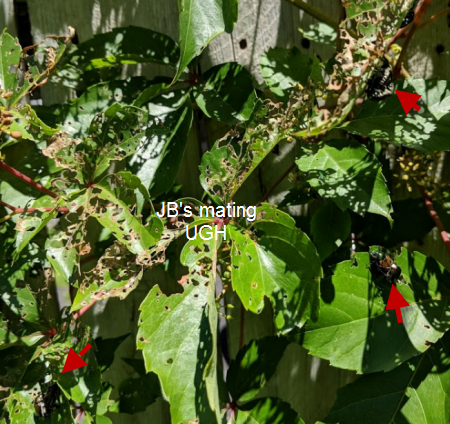 That meant that it moved to a specific rosebush.  Easy Elegance ‘Music Box’ from Bailey Nurseries.

I hacked the whole plant down and dug up the root system, all the time battling the beasts buzzing around me.

Now the question is, what will happen. Well, so far, there aren’t near as many around, and hopefully they did NOT just go next door.  (We have new neighbors, that would not be a good introduction to the ‘hood).

Japanese beetles were first found in United States in 1916, after being accidentally introduced into New Jersey. Until that time, this insect was known to occur only in Japan where it is not a major pest.

My method of control was soapy water in the evening, but we left for a long weekend and when we came back, my creeper was skeletonized. U fo MN Entomologist Jeffrey Hahn has a great article with some organic methods.

Other options include some nasty chemicals.  I’m not a fan as they also kill good bugs. However, I share these options on more information about control from the University of Minnesota, which says the best time to apply insecticides for grubs is from mid-July until early September.

I just bought some granular grub control which I will put down after the JB’s have mostly disappeared.  That’s when they’re laying eggs in the soil and making larvae!  Likely in August.

I’m creating a video to show you what I used to replace my vine….  Stay tuned!