Click on the link below to listen to my 2 min. Garden Bite radio show: Japanese Beetles intoxicated by geraniums

Had a little too much there, fella? 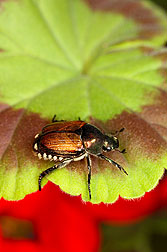 From the USDA research department: Within 30 minutes of consuming geranium petals, the beetle rolls over on its back, its legs and antennae slowly twitch, and it remains paralyzed for several hours. The beetles typically recover within 24 hours, but they often succumb to death after predators spot and devour the beetles while they are helpless.

The University of Colorado Extension has a great FACT SHEET on the Japanese Beetle from life to death! The information also includes all the chemicals and organics that work to kill the grub and the beetle, including the affects it has on other living beings, plants, insects and people.

Another interesting tidbit is that, according to research by Charles Ballou of the Bureau of Entomology, the sun increases the chances of JB death by geranium.  Those plants placed in sunlight somehow increased their toxicity and took out more of the beetles. This was in 1929!!!  Here’s the PDF: 290471A

Unfortunately the Japanese Beetle is not generally a picky eater, finding sustenance in nearly 300 different types of plants. I know that some folks use a product called Sevin to kill the adult beetles, the fact is, Sevin kills more than 500 insects. Some of which you really want, including honeybees. The active ingredient is carbaryl.  This information comes from Cornell University.

Japanese beetles lay eggs in your lawn that turn into lawn grubs in late July or early August. The grubs eat and dig up your lawn roots in late summer, hibernate all winter long and then come back with a vengeance in spring–ready to destroy your lawn again. 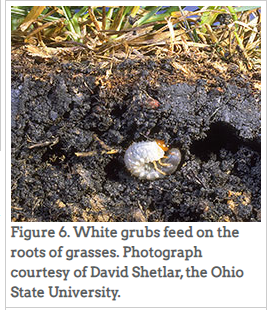 Look for grub damage. More information from the University of Minnesota Extension with more pictures too! 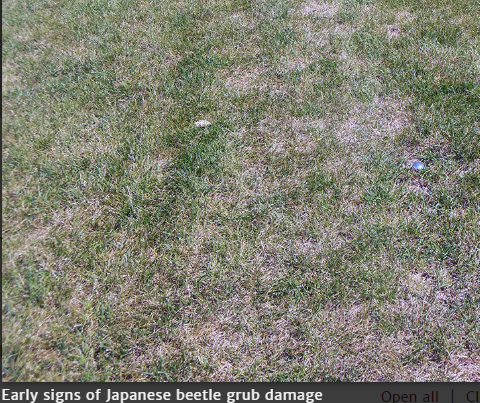 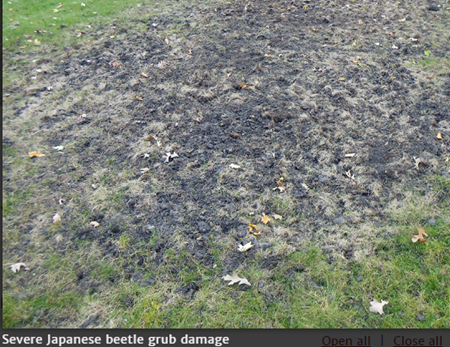 You can treat with parasitic nematodes, they don’t kill beneficial insects.