Click below to listen to my Garden Bite radio show:  Japanese Honeysuckle

Last week I told you about my mystery plant.  A vine that was labeled Lonicera aka Honeysuckle ‘Major Wheeler’.  Which it clearly was not after I let it grow like crazy last year, with no flowering, and then came up this year looking completely different.   The picture below doesn’t show how wide this plant grew.  This is ONE year of growth

I believe that it is actually a Japanese honeysuckle.  That’s a problem.  The leaves of a honeysuckle are oval but these grew back from the ground as lobed.

The root system was unbelievable.  I dug down and was amazed at the strength of the roots after just one year.  I was maniacal in removing it!

I think the neighbors that I was nuts!  I know there are more roots in the ground…  I tried to get as much as possible but they were a foot deep!  My fear is that it would take out my other plants…. 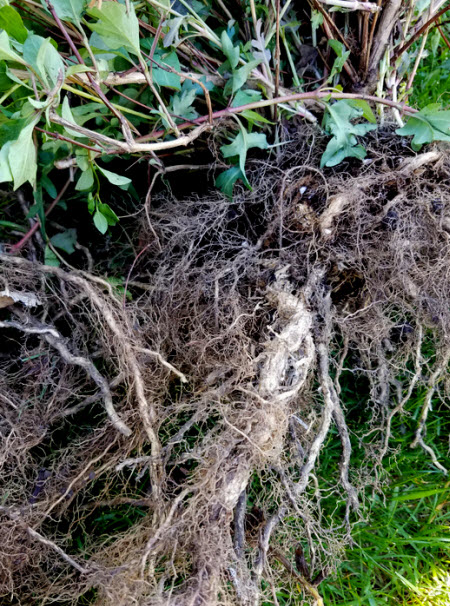 In North America, Japanese honeysuckle has few natural enemies which allows it to spread widely and out-compete native plant species. Its evergreen to semi-evergreen nature gives it an added advantage over native species in many areas. Shrubs and young trees can be killed by girdling when vines twist tightly around stems and trunks, cutting off the flow of water through the plant. Dense growths of honeysuckle covering vegetation can gradually kill plants by blocking sunlight from reaching their leaves. Vigorous root competition also helps Japanese honeysuckle spread and displace neighboring native vegetation.  Can you see why I wanted it out!

When I spoke with 3 different nurseries, most of them didn’t know what is was from the pictures I showed due to it’s lobed young leaves.  When I bought it on sale last year, it’s leaves were NOT lobed.  They looked like a native honeysuckle.  It grew very quickly.  The vine was at least 8 feet from July to September.

Likely it was grafted stock and a Japanese honeysuckle snuck into the mix somehow.  What I love about this is that it’s a “teaching moment”!  For me for sure… and hopefully for you too.  I also love the mystery.  I’m still not absolutely positive that it IS a Japanese honeysuckle, it’s my best estimate!