Click below to listen to my 2 min. Garden Bite radio show:  Living Coral – Pantone color of the year 2019

As we push headlong into 2019,  Pantone has chosen the Color of the Year…  Living Coral.  As described on their website, it’s an animating and life-affirming coral hue with a golden undertone that energizes and enlivens with a softer edge.  I see it as kind of a pinky-orangy salmon. 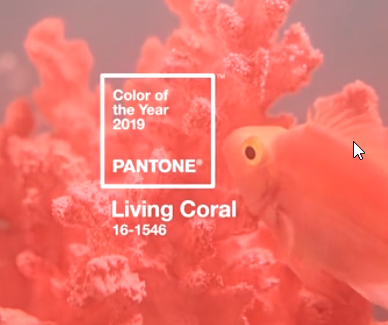 So who is Pantone and how come THEY get to pick a “color of the year”.  It’s a company that started as a printing business back in the 1950’s but a guy that worked with chemistry, came up with a color matching system in the early ‘60’s and bought the company.

Every year since 2000, a bunch of color-matchers from around the world get together somewhere in Europe and decide. They give meaning to every color depending on what the world situation is like. Pantone, a U.S. company, has said that color “has always been an integral part of how a culture expresses the attitudes and emotions of the times.”  That might be a little lofty for me, but it IS fun to see what they come up with!

As for incorporating ‘Living Coral’ in the garden….

There are lots of geraniums called ‘Salmon’.  Here are a couple…

a dahlia named ‘Mango Madness’ from Michigan Bulb company.  This one’s a beaut!

Another annual from Rare Seeds is ‘Coral Beauty’ Mask flower

And from Burpee, a perennial Echinacea named ‘Sombrero Hot Coral’

As you can see “corals” vary in color!  But there are some stunning choices out there.  Do a google search and you’ll find many more!  Here’s to 2019 in ‘Living Coral’!!