Click below to listen to my 2 min. Garden Bite radio show:  Lupines!

This is really a holiday week with tomorrow being Independence Day.  That got me thinking about a trip I took to Bayfield, Wisconsin, I was thrilled to see all the fantastic lupines blooming!

After coming home and doing some research, I learn there’s the purple lupinus perennis, also known as the western lupine, which is a smaller native to Minnesota and Wisconsin, and then there’s the “other one”, lupinus polyphyllus, or big-leaf lupine which is classified as invasive in some areas.  Darn it. 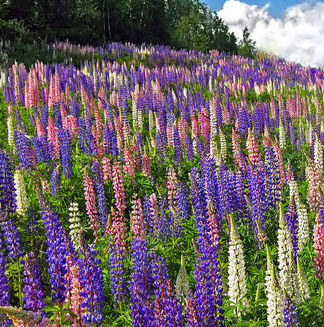 Both handle sun to part shade and do NOT like heavy rich or clay soils.  They prefer dry mesic or sandy like soils as opposed to loam.

Wild Lupine, also known in other parts of the country as Sundial lupine, blooms profusely in spikes that make it a popular choice for dry to sandy soils. It’s a legume, the seed pod is up to 2 inches long, hairy, shaped like a typical pea pod, and turns black when mature. Each pod contains 2 to several seeds.

The plant is essential to the life cycle of the Karner Blue butterfly, a federally-endangered species native to the Great Lakes region. At Wild River State Park, the MN side of the St. Croix River, efforts have been made to increase the Lupine population, as Karner Blues have been seen just across the River in Wisconsin.

Wild lupines are also a host for the Frosted Elfin butterfly and is attractive to other pollinators and hummingbirds too.