Click below to listen to my 2 min. Garden Bite radio show:  Marmorated stink bugs want in

This stinker has hitched rides all over the country and is more than just an irritant.  It’s working on coming into your house for the winter.

In fact, I just had one inside my screened porch. 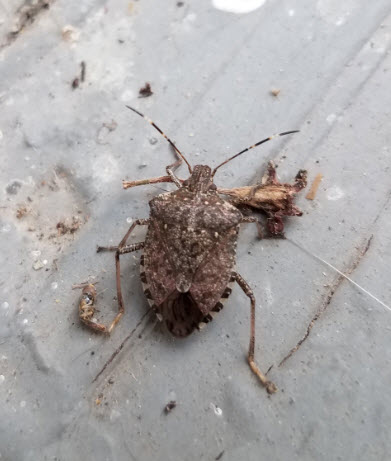 When disturbed or crushed, the brown marmorated stink bug emits an awful, pungent odor!  GREAT!.  It feeds on fruit trees, vegetables and soybeans and seems to believe that all parts are edible!  Originally from China, Korea and Japan it was first spotted in the United States in 2001.  Eastern states first reported this stink bug as having quite an impact on crops, especially in orchards where it creates necrotic, or dead, spots on leaves and deforms the fruit.  It’s cost millions of dollars in damages.  University of Maryland Extension on Stink bugs

WisContext had more info and pictures too.

Officially  the bug arrived in Minnesota in 2011, although unofficially some gardeners say they saw it before then.  Wisconsin has seen the stink bug since about 2010 although they’ve not suffered wide spread crop damage.

Another invasive is the Japanese barberry, a shrub commonly planted in landscapes.

A 7 year study conducted by the University of Connecticut found several cultivars of barberry are invading our native ecosystems. The Japanese barberries tend to alter the soil’s pH, nitrogen levels and biological activity.  Once established, this plant will displace our natives and form dense stands.

Here’s a little fact to help you understand the difference between a cultivar and a variety.  A cultivar is created by humans while a variety is created by nature.  This study suggests that the cultivars are able to cross pollinate with the varieties creating the invasive problem.

I did a whole Garden Bite on this bad boy.  Find it HERE.  It’s on the USDA’s hit list!  It’s everywhere…