Click below to listen to my 2 min. Garden Bite radio show:  More on Japanese beetles

Recently I posted on my Garden Bite facebook page about how many Japanese Beetles I have personally squished.  Yes, there is some satisfaction to that.  More importantly it drew a lot of questions and misconceptions about the destructive beetle.

First, it is NOT an Asian beetle.  Here are the differences: 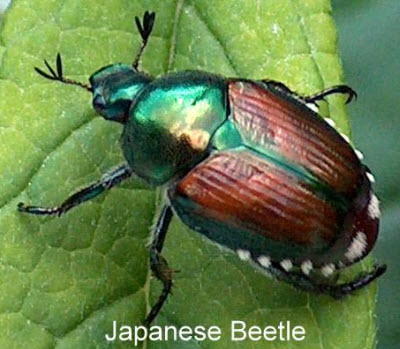 They have a bit of a greenish iridescence to them also.

The above are the ones that stink when you squish them!

I also checked on a posters message that squishing them just attracts more of the beetles due to pheromones being released.  There is some evidence that it may do just that!  Darn it.  Now I’m drowning them in soapy water.   You don’t need much soap.  I used a small parmesan cheese container and a little soap.

Another poster offered her solution, planting white geraniums near her beloved plants.  This one is debatable.  Researchers have studied GERANIUM PETALS as a possible control. According to the Agricultural Research Service ~ when Japanese beetles eat the petals of a geranium flower, within 30 minutes they roll over on their backs, their legs and antennae begin to twitch, and they are paralyzed for a few hours. Even though they are typically recovered within 24 hours, they often fall victim to predators, since they are unable to defend themselves while they are paralyzed.  So, is it the geraniums or is it the predators?

The good news is, they don’t hang around too much longer than a month, but still LOTS of time to destroy your plants.

They seem to prefer my Virginia Creeper, my hardy hibiscus and my roses.  Oh, the cannas too and then I found them all over my newest Coneflower.  With the research I’ve done, the best method is to pick them off by hand and toss into soapy water.  There are chemicals but I just hate to use them and they don’t last either.

The University of MN extension on Japanese Beetles and control

More from the University of Wisconsin on Japanese beetles 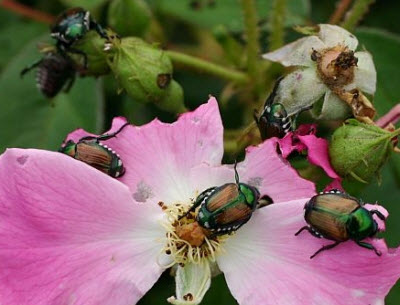