Click below to listen to my Garden Bite radio show:  Nothing like a living fence – ‘Parkland Pillar’ birch

There’s nothing like a living fence.  Especially if your neighbor has their motor home parked in their driveway.  I discovered a wonderful option in my Northern Gardener magazine.  It’s a birch that works wonderfully in smaller landscapes, urban lots.  The new and narrow, ‘Parkland Pillar’ birch (Betula platyphylla ‘Jefpark’ ) can be used to screen unsightly views or provide privacy for small yards.

While it can grow between 30 and 40 feet, its width remains less than 7 feet.  The tree is hardy to zone 3 and is a “sport” of the North Dakota State University variety ‘Dakota Pinnacle’.  It was first introduced by Bailey Nurseries in 2006 as part of their First Editions series.

‘Parkland Pillar’ is a fast growing Japanese variety of birch that boasts white bark and dense, dark green foliage that turns golden in late fall. It’s suitable for gardens, screens or boulevards. Tolerant of heat, drought, and alkaline soils, Parkland Pillar is an excellent choice for urban landscapes. Its narrow form makes it perfect as an accent tree or it can be planted in multiples to form a privacy screen.

This birch offers dense leaf coverage with a strong central leader.   Its relatively fine texture sets it apart from other landscape plants.  It’s also relatively low maintenance.  One difference, according to a local nursery, it that it should only be pruned in summer after the leaves have fully developed, as it may ‘bleed’ sap if pruned in late winter or early spring. Deer don’t particularly care for this plant and will usually leave it alone in favor of tastier treats. It has no significant negative characteristics.

It has a low canopy with a typical clearance of 2 feet from the ground, and should not be planted underneath power lines. It grows at a fast rate, and under ideal conditions can be expected to live for 40 years or more. 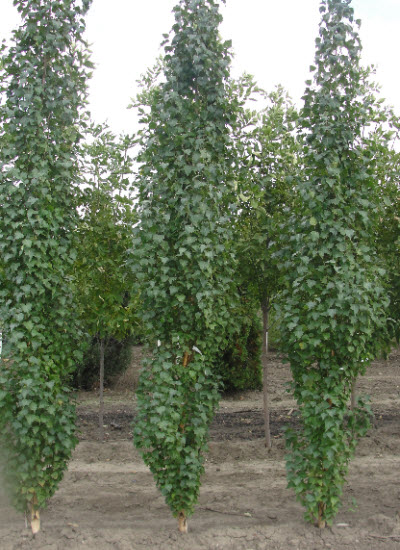 2 thoughts on “Nothing like a living fence – Parkland Pillar birch”