Click below to listen to my Garden Bite radio show:  Plant sales and planting

On a recent project, I was asked to figure out something to cover up septic tank covers.  The property came with fake rock covers, which work okay but, well, let’s face it, don’t look real at all.  And they also made it impossible to mow in between.  The weeds out there were taller than me.  And prickly too! 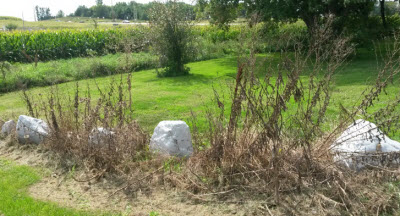 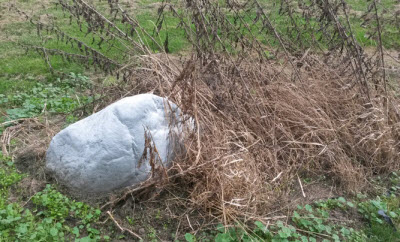 The good news for the owner, is that plant sales are abundant and now is a great time to plant perennials.  I chose native grasses as the homeowner wanted no future maintenance.

I went to my local nursery and shopped the variety they still had.  The area required 20 plants, which meant a little creativity.  I found the perfect mix with 10 miscanthus purpurascens, Flame grass and a switchgrass called ‘Northwind’. 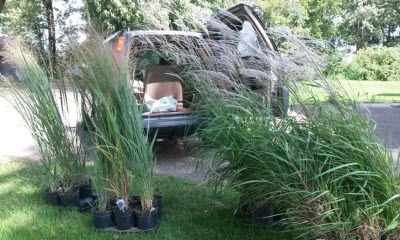 While the flame grass flowers are white and graceful, the switch grass flowers are red, open and airy.  Both plants leaves turns red in the Fall.  After I purchased, it was planting time.  Well, no, not really, it was weeding time!  After pulling weeds that had grown into and over black plastic, which had about 6 inches of soil over it after years of being there.

When purchasing plants in the late season, that means many of them are root-bound in their pots.  That calls for an aggressive pruning session with a knife.  I mean one that’s got some guts to it.  Get up in that root ball and prune out any twisting roots.  Don’t worry about pruning the smaller fibrous ones, those can be pulled and splayed out, however, you need to make sure the thicker roots are not going to strangle the plant later down the road. 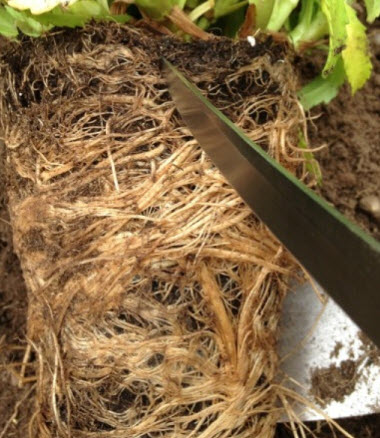 After pulling the weeds, I used no chemicals, so there will be some maintenance to keep at that until the grasses take over, it’s time to place the plants.  I used a tape measure to place the plants about 3 feet apart.  I put the Flame Grass to the road side of the “rocks” as they will grow to 4 to 5 feet.  The Northwind switchgrass are behind them.  They grow to about 5 to 6 feet. 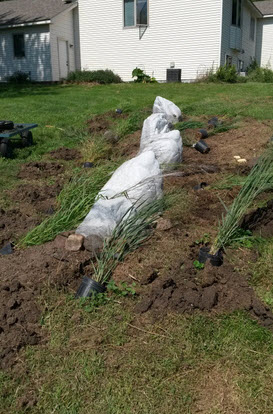 I dug holes twice the width.  Place plants at the same depth they were in the pot UNLESS there’s a bunch of soil on top of them.  That will happen sometimes especially with trees.  The idea is to have those fibrous roots at soil level.  If you plant too deep, they might not get the water, air and nutrients they need as readily.  The anchoring roots will grow down and establish the plants.  Native grasses are tough plants, they don’t need to be mulched but I recommended to the homeowner to place woodchips down.  The plants will spread 2 to 3 feet, filling in the area after a few years. 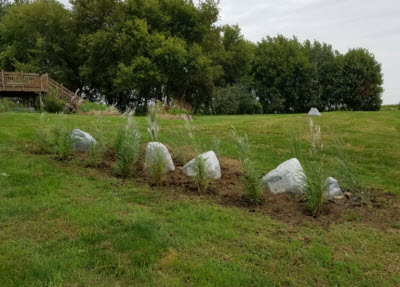