Click below to listen to my Garden Bite radio show:  Rabbits – of romance and rage

Bunnies, the bane of gardeners everywhere!

Short of a shotgun, which I urge you to check local ordinances BEFORE doing that, what do you do?

Oh it’s rage or romance – a real love/hate relationship with those furry, floppy-eared, big-eyed bunnies!  They have a voracious appetite for fresh vegetation which they cut clean off.  They’re also voracious at something else which makes them capable of producing up to 18 baby bunnies a year! I went overboard here, the fencing really need only be 2 feet tall but it’s what I had.  They ate barberry!

Liquid Fence and Plant Skydd are 2 of the best repellents for rabbits.  I personally like Plant Skydd in the granular form, it lasts up to 3 months and is completely safe for kids and pets.  I have not found Plant Skydd in many stores, I had to order it online.

In 2016 I had a terrible run with rabbits even after using Plant Skydd.  It was from the previous year.  This year, 2017, I bought a new bag.  We have rabbits living very close to my vegetable garden and, so far, I’ve not had them start munching.  There’s lettuce coming and beets…  we’ll see.  I’ll keep you posted!

One good thing about Rabbits – their poop is great for your garden!

The bunnies WERE eating from my front garden as well.  After putting the new bag of granular Plant Skydd down, they’ve left it alone…. so far! 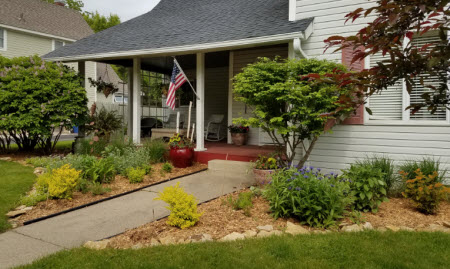