Click below to listen to my Garden Bite radio show:  The 411 on Bt

Yesterday I mentioned using Bacillus Thuringensis, better known as Bt.  It’s a naturally occurring soil bacteria, that acts as a stomach poison.  It may take days to kill the insect who has to ingest it. 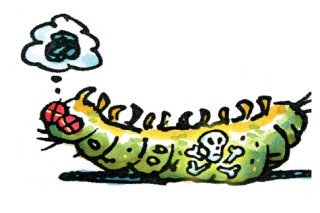 That sounds kinda mean BUT…

Bt doesn’t affect the natural enemies of the insects you’re trying to get rid of.   It also has no effect on pets or plants. Wahoo.

Because the insect has to ingest Bt that can limit it’s effectiveness on bugs that tunnel into plants.  Let’s face it, Broad spectrum insecticides are easier to use but they kill beneficial insects too, they’re not healthy for your pets, kids, the environment and you can’t harvest produce for a period of time after you’ve sprayed.

One of the best things you can do is ATTRACT the good bugs.  Ground beetles hunt for slugs; bees, ladybugs and lacewings eat aphids.

Creating a friendly insect border will draw those beneficial insects to your garden.  Some great choices are ornamental grasses, pussy willows, Echinacea, potentilla and euonymus.  They don’t have to be right next to your gardens but near.

Diversity attracts.  I plant annual zinnias near my veggie garden, cilantro, dill and sweet alyssum are great choices to plant in the bed, and marigolds are another choice.  Some user friendly pollinator plants would include yarrow, liatris, Shasta daisies and coreopsis.