Click below to listen to my 2 min. Garden Bite radio show: The beasts are back – Japanese beetles

Japanese beetles have been all over my roses, my French lilac, my honeysuckle vine near the back door and on other plants I’ve never seen them on before.

Armed with my bucket of soapy water I try, but honestly, there are a lot more of them than me. Japanese beetles feed on the leaves, flowers or fruit of more than 350 species of plants.

Japanese beetles were first discovered in Minnesota in 1968 and before that in parts of Wisconsin. From a few to millions, they have stuck around in zones 4 and warmer. While their numbers fluctuate each year, they’re still an issue. The adults feed on flowers and foliage, the grubs feed on turf and ornamental roots.

University of MN information on JB.

Neither of these places recommend the traps. They say they just bring more beetles to your landscape in other areas….  other places sell the traps. I just bought one for $5… but I’m not so included YET to use it. 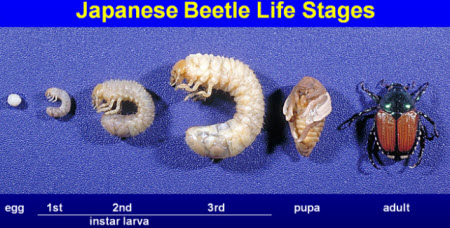 Japanese beetles were first found in the United States in 1916, after being accidentally introduced into New Jersey. Until that time, this insect was known to occur only in Japan where it is not a major pest. While my soapy water in the evening method is okay, if you’re gone for a few days, your plants could be skeletonized.  Note, chemical methods also kill good bugs

Japanese beetles feed for six to eight weeks so it is important to continue management until their numbers decrease. Once they are present in large numbers, managing them becomes more difficult.

Most feeding is finished by mid to late August. But they’ll be back… bummer.