Click below to listen to my 2 min. Garden Bite radio show: Tucking tools away and a Japanese Lilac update

Some of us have already experienced January type temperatures and snow before you had a chance to tuck your tools away! Don’t let that stop you, you still have time!

I barely made it myself with disconnecting my hoses but I have to mention, it’s a lot easier with the quick disconnect I got from Dramm.

I also love the new hose protector they came out with. I sort of have to be an acrobat to get at one of my outside faucets and the hose protector makes it easier.

Thoroughly drain your hoses, sprayers, watering wands and such as freezing can destroy them. Okay, I’ll admit that last year I didn’t drain my hoses. Here’s the good news, they’re hoses from DRAMM and they did NOT bust, that’s not to say it was a good idea! 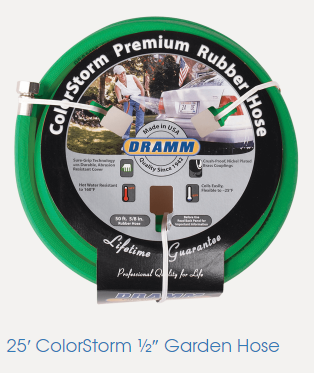 This year I had no plan on risking it! Another thing, store those watering tools inside to prolong their life. I’ve already tucked away my trowels, pruners, saws and such.

I have an update on the controversy I had in May this year about Japanese Tree Lilacs. I had two experts disagree on whether they were invasive or “one season wonders”.

My local tree expert, Leif Knecht, from Knecht’s Nurseries did some additional research and found that they do have a tendency toward suckering but he found one that is seedless, therefore not messy and not prone to suckering! It’s called ‘Snowdance’.

Bailey Nurseries in St. Paul, MN introduced ‘Snow Dance’ which is loaded with large creamy white flower heads that produce no fruit or seeds.  Enjoy the show and skip the mess! It’s a little shorter but with a little wider canopy that other cultivars. It’s hardy to zone 3!