Click below to listen to my 2 min. GardenBite radio show: Where’s ‘global warming’ in the Upper Midwest?

Why is it so cold here if there’s global warming? Why doesn’t that global heat come to the Upper Midwest? It’s bleepin’ cold out! Just a few things I heard last week as we experienced temperatures below zero.

One of the local meteorologists, Paul Huttner, was pondering that and explained that, while October was the warmest recorded around the globe, it certainly wasn’t in the Upper Midwest!

Huttner says one key may lie in ocean temperatures in the North Pacific. The so-called “blob” is a huge area of unusually warm ocean water in the North Pacific. It emerged in 2014 and has resurfaced again this year. He says, this massive warm water zone can impact jet stream patterns in the atmosphere above.

It may be one of the primary reasons Alaska has seen the warmest year on record while pushing cold air into the Midwest. Oh lucky us! There have been some gloomy gusses out there already! It’s tough when it’s just plain cold without benefit of a pretty snowfall, and that goes for our plants that could use that blanket of protection.

Other climate change reflections include the fact that our storms are more intense. As witnessed last year along the North Shore where Canal Park was smacked hard… 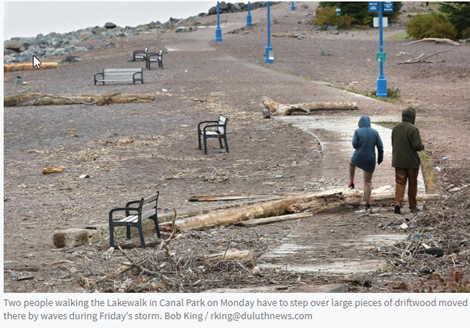 and, right here in my little River City, Northfield, we had ten tornadoes blast through. Cleanup continues everywhere. (They’re saying there were actually 15 tornadoes!)

What’s really increasing are the storms with 3 or more inches of rain. That’s just too much saturation and our forests are impacted. The soil isn’t absorbing the water and tree roots are, literally, drowning.

There ARE some steps being taken, that is called resilience. We can certainly cut back on greenhouse gases, but we will also be adapting to a new normal.