Click below to listen to my 2 min. Garden Bite radio show: Wild cucumber takes over

While not QUITE as “over the top” this year, wild cucumber is making it’s appearance known. Since 2020 has, so far, been a year of “over the top”, I’m grateful for ONE thing that’s not quite as bad…. however, let’s examine this annual vine that loves to be “over the top”.

This vine loves to climb and drape itself over fields, trees, shrubs, grasses, flowers throughout much of the country!   It’s Latin name is Echinocystis lobata. It has a spiny fruit.

It’s a vining native annual in the cucumber or gourd family (Cucurbitaceae). Wild cucumber is generally overlooked until it has overtaken the  plants it is growing on.  It occurs throughout much of North America but was significantly abundant the last few years. This draping vine grows from seed each year and, literally looks like a cucumber plant at first.

From Prairie Moon Nursery in Minnesota who sells it: Wild Cucumber is an annual; it completes its life cycle during one season but will re-seed. The dried vines and cucumbers are great in dried arrangements. Despite its name, the Wild Cucumber is NOT edible.

The smooth, branching vines reach lengths of 15-20 feet and can be aggressive. Wild Cucumber is identified by its alternately placed star-shaped leaves, which resemble maple-like leaves, each with 5 to 7 pointed lobes. Its flowers are pale yellowish-white and are very fragrant. Wild cucumber’s pulpy green, oval seed pods grow up to two inches long and are covered with sharp spines so beware. It likes sun and moist soil but will grow well in quite a bit of shade. When ripe, the pod bursts open and large brown or black seeds are found. 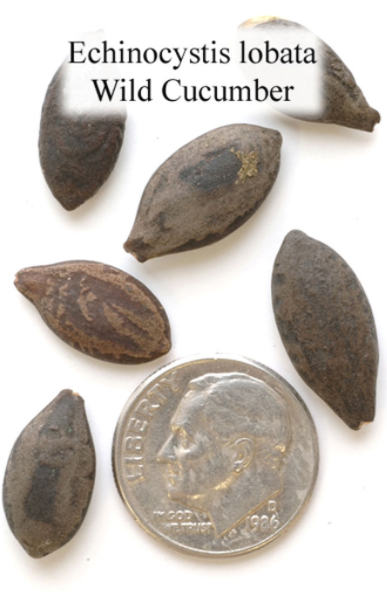 The branching vines can grow up to 25  feet long, climbing onto other foliage with curling, 3-forked tendrils that arise from the leaf axils. The tendrils coil when they touch anything to attach onto for support.  While the flowers are kind of pretty and certainly fragrant, this plant can choke out smaller plants.

Wild Cucumber can create very dense, large patches, seeming to smother everything it covers but, according to minnesotawildflowers, it rarely does much actual damage. Yet other information says it can do considerable damage. University of Wisconsin – Madison on Wild Cucumber

Wild Cucumber is NOT defined as invasive but rather AGGRESSIVE! Yes, you could say that! If I were a shrub being shrouded in it, I’d be wanting to get it off me!  Like having a blanket covering you while having a hot flash! ACK!

If you have these plants, and don’t want them, pull them off. Don’t use chemicals, you’ll also damage the plant it’s on. The point is to get pull it BEFORE the fruit bursts and leave the seeds waiting to plant themselves next year!