Click on the link below to listen to my 2 min. Garden Bite radio show:  Wild Cucumber

It has draped itself over everything!!!  I have never seen so much Wild Cucumber.  Yes, that’s that vine that is covering fields, trees, shrubs, grasses, flowers along nearly every rural road through Minnesota, Wisconsin and parts east,west and south!

It’s Latin name is Echinocystis lobata. The name Echinocystis comes from the Greek echinos for “hedgehog” and cystis for “bladder”, appropriately describing the spiny fruit.

A vining native annual in the cucumber or gourd family (Cucurbitaceae), wild cucumber is generally overlooked until it has overtaken the  plants it is growing on. It occurs throughout much of North America but has been significantly worse this year, starting, really around the end of July/first of August.  This choking vine grows from seed each year and, literally looks like a cucumber plant at first.

The branching vines can grow up to 25 or 30 feet long, climbing onto other foliage with curling, 3-forked tendrils that arise from the leaf axils. The tendrils coil when they touch anything to attach onto for support.  While the flowers are kind of pretty and certainly fragrant, this plant can choke out smaller plants. 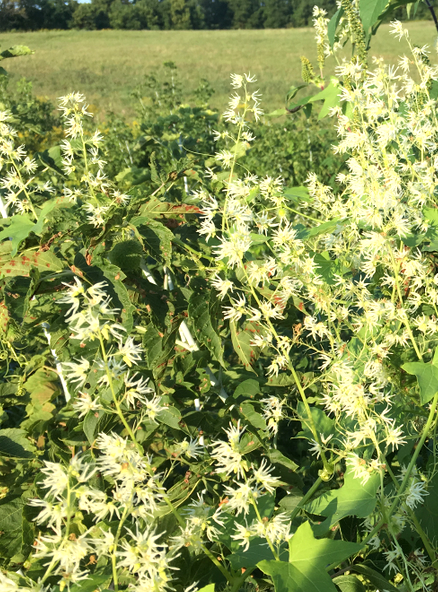 Now, as I researched Wild Cucumber, as EVERYONE, is talking about it, come to find out, it’s native AND some reputable nurseries even sell the seed!

Wild Cucumber can create very dense, large patches, seeming to smother everything it covers but, according to minnesotawildflowers, it rarely does much actual damage. Yet other information says it can do considerable damage.  University of WI – Wild Cucumber

Wild Cucumber is NOT defined as invasive but rather AGGRESSIVE!  Yes, you could say that!  Dodge County – U of W Ext.

If I were a shrub being shrouded in it, I’d be wanting to get it off me!  Like having a blanket covering you while having a hot flash!  ACK!

If you have these plants, pull them off.  Don’t use chemicals, you’ll also damage the plant it’s on.  The point is to get pull it BEFORE the fruit bursts and leave the seeds waiting to plant themselves next year!