Click below to listen to my 2 min Garden Bite radio show:  A plea to ERADICATE Siberian Squill  – not mine!

While most of us welcome this darling little blue Siberian Squill, they are listed as invasive on the Minnesota wildflowers website with a message to ERADICATE in all capital letters.

This is a classic case of gardening gone awry. Siberian Squill was brought to the U.S. as an ornamental and is still sold in Minnesota and elsewhere, but it has also escaped into the wild and become invasive. It readily spreads itself and is difficult to get rid of, as broken roots often resprout. It is very hardy and cold tolerant to zone 2.  It’s also left alone by critters from voles to deer.

Sadly, the same traits that make it attractive as a garden plant (besides the vivid color) are also what make it invasive. Large colonies of squill can be seen in the eastern counties of the state, from Duluth to Rochester.  The site goes on with a plea to gardeners to STOP planting this! 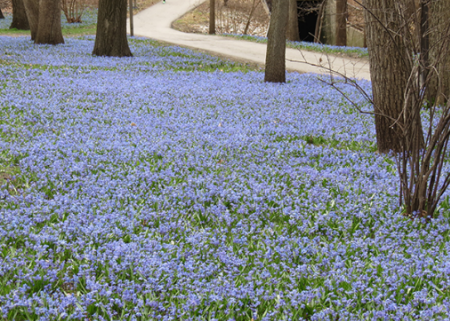 Meanwhile, across the border in Wisconsin, they don’t seem too worried.  There’s no dire warning.  And, in fact, they tell you where to get it!  Click on the link above!

However, there are some other native options you might plant instead.  They include woodland blue phlox (Phlox divaricata),

I will admit to loving the little blue siberian squill but will say I never planted it.  It’s just doing it’s thing… meaning I keep getting more and more.  A drive through neighborhoods and you’ll see it sweeping across partially shaded lawns. 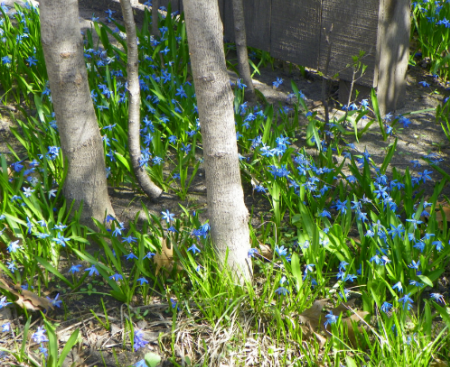