Click below to listen to my 2 min. Garden Bite radio show: “Murder” hornets

If this weren’t a crazy enough year, we’ve also heard of something called “murder hornets”. That is NOT a technical term and the University of Minnesota thinks it’s a no-no to say it!

Vespa mandarinia is the world’s largest hornet, measuring between 1½ to 2 inches in length. 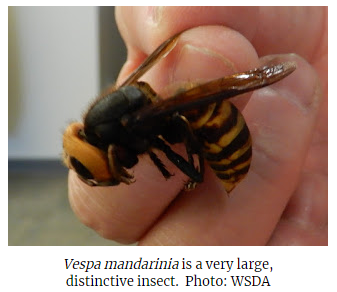 It was found in Washington State in December of 2019. Aside from size, they eat honey bees. Sure, they’ll take other tasty insects but they prefer to eat honey bees and are capable of destroying entire colonies.

This video has a lot of information and is kinda disturbing… especially for our honeybees!!!

The name, Murder Hornet, comes from their status as an insect predator. A group of 30 V. mandarinia can kill a colony of 30,000 honey bees in under four hours. The attacks occur in three stages: hunting, slaughter, and occupation. YIKES. These hornets scout honey bee or wasp colonies and mark them with a scent to alert their other nest members. Next, the hornets kill the adults in the colony. Lastly, the hornets occupy the colony and harvest the larvae and pupae to bring back to their colony to feed their own young. 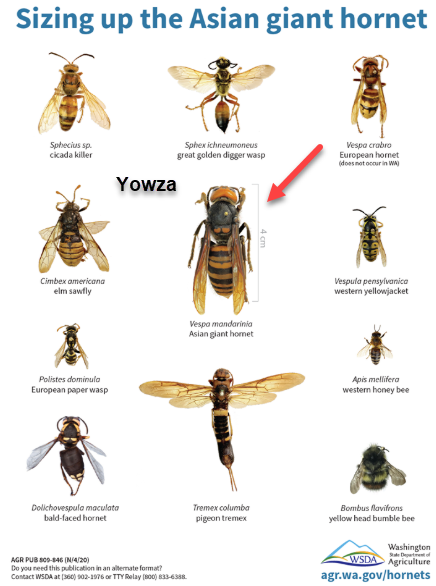 Vespa mandarinia is native to Asia including eastern and southeastern Asia in temperate and subtropical areas.

They’re not here in the Upper Midwest and, according to the U of MN likely won’t because they’d never survive our winters. So, we got that going for us!  Those 40 below zero temperatures don’t sound quite so bad now, do they?

More information on bees from the U of MN Bee Lab

Information from U of Wis. ext. on honey bees