Click below to listen to my 2 min. Garden Bite radio show:  Stretching your zone with a gorgeous grass for shade

As I was wandering through the perennials of the year, there’s a grass I just love but have been a little leery about planting it since i live in zone 4b and it’s a zone 5 rated plant.  Hakonechloa macra ‘Aureola’.

This lovely grass is great for shade.  It’s often used in Japanese gardens, where it originated. Variegated but nearly all yellow, the leaf blades have narrow green stripes, mostly near the margins. It’s cascading habit, with most of the leaves arching in the same direction, make it appear like a golden waterfall. Some suggested areas to plant include down slopes, draped over rocks, crawling over the edges of walls, at the front of the garden, or even in containers.

Though this grass does spread by rhizomes, it is a slow grower and won’t overtake its neighbors very quickly. It’s a beautiful ground cover.  When grown in part shade, the yellow tones in the leaves will be most pronounced. In deep shade, the variegation will be lime green.

In the cooler days of autumn, the golden foliage becomes infused with shades of pink and red.  The shades vary. 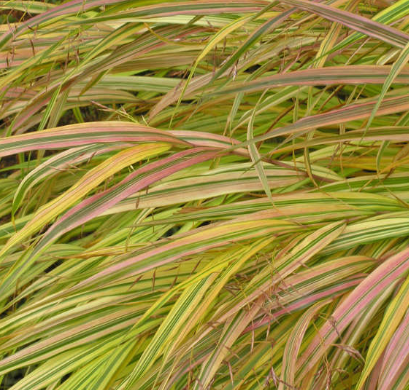 In colder climates, it will die all the way back to the ground. I think it’s worth stretching my climate zone to give it a try!  Good news, hakonechloa has no serious insect or disease problems. Although root heaving can be a problem in winter.